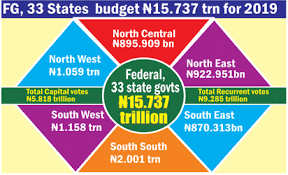 An Economist, Prof. Segun Ajibola says the low allocation of N2 trillion for capital expenditure in the 2019 budget shows the pressure on the economy.

Ajibola said this in an interview with the News Agency of Nigeria (NAN) on Thursday in Abuja, while reacting to the passage of the 2019 Appropriation Bill of N8.92 trillion by the National Assembly.

The budget was increased by the legislature by N90 billion from the N8.83 trillion presented by President Muhammadu Buhari on Dec. 18, 2018.

According to him, the cost of governance is high and it is making the capital expenditure to drop.

NAN reports that the provision for capital expenditure in 2018 budget was N2.8 trillion.

“We have a lot of pressure on the budget, we have debt to service, it is the capital budget that will bear the brunt.

“I believe we will be able to moderate the allocation to capital budget by the time we generate sufficient returns from the investment from on-going projects.

“If we are able recoup the initial expenditure on the projects, then the burden on capital budget will be down,’’ he said.

Ajibola, a former President of the Chartered Institute of Bankers of Nigeria, however, said the implementation of the budget was feasible.

He said the implementation of the budget was realistic with the key assumptions and the expectations.

Daily Oil Production stood at 2.3 million barrels per day, Oil Benchmark stood at 60 dollars per barrel, while the Exchange Rate stood at N305 per dollar.

Ajibola said that the 60 dollar per barrel was sufficient conservative as we pray that there would not be any change of price at global market.

“The exchange rate of N305 per dollar is also okay.

“I believe that eight months is enough for the budget to be fully implemented and to reap its fruits,’’ he said.