The African Union, Economic, Social and Cultural Council, (AU-ECOSOCC)
Nigeria chapter has called on the Federal Government to expedite
action on the signing of the Africa Continental Free Trade Agreement,
saying Nigeria stands to benefit more than other member states.

Speaking after a meeting with the Controller General, Nigeria Customs
Service, Col. Hameed Ali, AU-ECOSOCC Nigeria Representatives, Dr.
Tunji Asaolu, said signing the agreement will give Nigeria a better
pedestal to negotiate it position properly, adding that further delay
will not favour the country’s trade sector.

He said the body was ready to work with all stakeholders in the sector
to ensure that Nigeria take advantage of the agreement before it is
too late.

“We are commencing advocacy visit to strategic stakeholders to
alleviate their fear, because Nigeria is one of the biggest economy in
Africa and when the ACFTA is signed.

“As it is now, 19 countries have signed and if three more countries
append their signature, it becomes mandatory for Nigeria to key in as
it will become effective once 22 countries signed, then the door of
negotiation will be closed against Nigeria.

“Then will be force to accept whatever comes our way, but now we can
signed and join in the negotiation to protect our interest, or else
Nigeria risk being participants only.

“Now, Intra-African trade is low, just 14.2%. We need to strengthen
the trade within West Africa and the whole continent as a whole, which
is the core interest of the AU,” he said.

He said the AU-ECOSOCC Nigeria in collaboration with Nigeria Custom
and other stakeholders will be hosting a national stakeholders
dialogue in Abuja from 12-13 March 2018 to bring together private
sector, civil society groups, academia, women groups and development
actors in Nigeria to strategize and plan on how to tap into the
potential benefits of the AfCFTA.  This forms part of efforts to
consolidate on-the ongoing consultations undertaken collectively and
individually by the Presidential Committee on AfCFTA.

“The African Union remains committed to implementing its regional
integration agenda through its 8 Regional Economic Communities (RECs):
COMESA, EAC, and SADC in the east and southern Africa region, along
with ECCAS, ECOWAS, IGAD, AMU, and CEN-SAD covering Central, West and
Northern Africa. Although some significant progress has been made to
date, the multiplicity of inter-governmental organizations in Africa
(currently 14) and overlapping memberships in the RECs poses a
challenge for African integration and the implementation of regional
agreements.  Thus the African Continental Free Trade Area (AfCFTA)
Agreement – covering all 55 AU member states – was signed in March
2018 and is expected to enter into force early this year.

“In total, 44 out of the 55 AU member states signed the consolidated
text of the AfCFTA Agreement, 47 signed the Kigali declaration and 30
signed the Protocol on free movement. Additionally, five countries
signed the Agreement during the 31st Ordinary Session of the African
Union in Mauritania on 1 July 2018 – South Africa, Sierra Leone,
Lesotho, Burundi, and Namibia – bringing the total number of
signatories to 49.

“To date, nine (9) countries have deposited their instruments of
AfCFTA ratification with the Chairperson of the African Union
Commission: Ghana, Kenya, Rwanda, Niger, Chad, eSwatini (former
Swaziland), Guniea, Uganda and Ivory Coast. In addition, countries (8)
countries – South Africa, Sierra Leone, Senegal, Mali, Namibia, Congo,
Togo and Mauritania – have received or indicated intention of
parliamentary approval for ratification, bringing the total number of
ratifications, deposited and pending, to 17 (awaiting confirmation
from Djibouti, which would bring the total to 18), he explained. 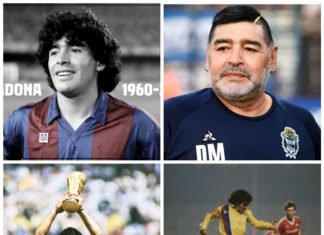 KAFTANPost - November 25, 2020
0
By Aiyeku Timothy The football world was thrown into mourning on Wednesday following the demise of Diego Maradona at the age of 60. Maradona had battled...