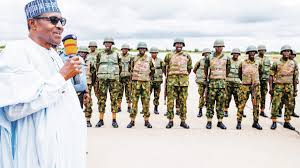 President Muhammadu Buhari on Tuesday charged troops of the Nigerian Army to change strategies to tackle the insurgency and other emerging security threats in the country.

The president acknowledged that the army had saved Nigeria from disintegration.

He said this in Abuja during the grand finale of 2021 Nigerian Army Day celebration (NADCEL) lecture series.

Buhari, represented by the Minister of Defence, Bashir Magashi, said as a responsible government, his administration was conscious of the challenges faced by the citizenry.

He said: “I charge the officers and men of the Nigerian Army to be proactive in evolving new strategies, methods and techniques of winning the hearts and minds in the current phase of operations.”

He added that the army deserved to be commended for restoring the internal security of the country back to normal.

He said: “Government services and private businesses have since resumed in areas hitherto controlled by these terrorists.

“Therefore, as we celebrate the achievements of the Nigerian Army and all security agencies, I’d like to thank all well-meaning Nigerians for their support and understanding,” Buhari said.

The Chief of Army Staff, Maj.-Gen. Faruk Yahaya, in his remarks, said it was in view of the significant role the army played in the resolution of the civil war that July 6 was set aside to keep Nigeria’s history alive as well as project and educate members of the public on its activities.

He said the day also afforded the army the opportunity to showcase its contributions to the socio-economic and political developments of Nigeria.

“This celebration is also important because of its role as a constant reminder of the sacrifices the army has continued to make to keep Nigeria a united and indivisible nation.

“Additionally, while reflecting on the past, NADCEL presents an opportunity for the NA to also deliberate on its future by fine tuning and redirecting its efforts to remain in perfect harmony with its constitutional responsibility of defending the territorial integrity of Nigeria and its constitution.

“This year’s celebration is low key, due to the unfortunate and sad development that led to the death of my predecessor, the immediate past Chief of Army Staff, Lt.-Gen. Ibrahim Attahiru and 10 others in a plane mishap on Friday May 21 in Kaduna,” he said.