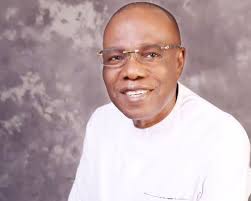 The Honourable Justice Nwabunike gave the judgment today in a suit no: A/230/2021 between SENATOR DR UGOCHUKWU UBA VS INDEPENDENT NATIONAL ELECTORAL COMMISSION. Others joined in the suit are the Peoples Democratic Party and Valentine Ozigbo

The court dismissed all the preliminary objections filed by Valentine Ozigbo and declared that there was only one proper State Congress and primary election won by Ugochukwu Uba and declared that any other result by which Valentine Ozigbo was purportedly declared winner is null, void and of no effect for violation of section 25 of the PDP Constitution, Section 87 of the Electoral Act and extant judgment of the High Court of the Federal Capital Territory and directive of INEC that PDP should use the list of authentic delegates of of the party to conduct the primary election.

The court further held that the PDP having used the court approved list of candidates to conduct the election which Ugochukwu Uba won beating Valentine Ozigbo and 13 other aspirants, PDP should not have purported to conduct another exercise same day using only 62 votes out of 218 random names to declare Ozigbo the winner of the primary election.

This judgment has now cleared the way for the Peoples Democratic Party to have a Governorship candidate published by INEC, as the publication made by the National electoral umpire on 16 July 2021 had omitted the name of a candidate for the PDP by merely inserting “Court order” in place of a named candidate.

By this judgment, Ugochukwu Uba is the candidate of the PDP.

Reports reaching KAFTANPOST is that Valentine Ozigbo camp is dejected and murmuring along the line of filing an appeal. However, many elders of the beleaguered erstwhile ruling party are urging all camps to rally round Ugochukwu Uba and save the party from avoidable appellate litigation that would not brighten the fortunes of the party in a crowded and keenly contested governorship election in the State.