Gov. Oluwarotimi Akeredolu of Ondo State, on Tuesday said that about 138,000 hectares of government forest reserves had been encroached upon by farmers in the state.

Akeredolu, represented by the Commissioner for Agriculture, Mr Adegboye Adefarati, made this known while inaugurating the newly reconstituted state task force on farmers in government forest reserves in the state.

“We have about 307,000 hectares of forest reserves in Ondo State but 138,000 hectares have been encroached upon by farmers. That is about 47 per cent of the forests.

“Therefore, we cannot fold our arms and allow that to continue. There is need to regulate the activities of the farmers because it will get to a stage where we will not be able to access our forest reserves again.

“Some of the farmers have been there for 10 to 15 years, some of them planted cash crops such as cocoa while some are even paying money to illegal persons.

“Although government will not drive them away, we are going to checkmate their activities in the areas.”

Akeredolu said the major assignments of the task force are to register farmers and check illegal occupation and encroachment in the forest reserves well as ensure regular payment of appropriate rents to the government.

He explained that the task force was introduced in 2019 and later disbanded due to some challenges in the operation which necessitated the need to restructure and re-position it for better performance and effective service delivery.

“In spite the challenges we had in 2019, we still realised about N200 million into government purse where there used to be no revenue in the past.

“This was made possible through the enforcement by the task force and we are targeting about N400 million to N500 million in 2020,” Akeredolu said.

He admonished members of the task force to justify the confidence government reposed on them by working relentlessly for regeneration of the forests and protection of the resources for future generations.

The governor also charged farmers not to pay money to members of the task force directly but government’s dedicated account.

“No farmer should give any task force member money, they should pay into government account. Anybody that gives any member of the task force cash does so at his own peril,” he said.

Mr Ogundipe Amos, the Coordinator of the task force, who spoke on behalf of members, expressed gratitude to the state government for counting them worthy of the position.

He assured that members of the task force would work within the scope of their operations and ensure that farmers complied with the rules and regulations set by government.

News Agency of Nigeria (NAN) reports that members of the 21-member task force were selected from the three senatorial districts of the state. 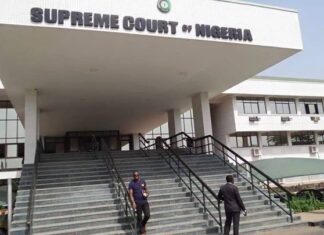 KAFTANPost - September 29, 2020
0
The Senate on Tuesday received a request from President Muhammadu Buhari for the confirmation of eight Justices of the Court of Appeal as Justices...