The Federal Government has warned that due to the rise in crude oil price above $60, Nigerians should prepare for an increase in petrol pump price.

Recall that at $43 per barrel, the pump price of petrol was set within the range of N160-N165 about four months ago.

The Minister of State for Petroleum Resources, Chief Timipre Silva, gave the advice at the official launch of the Nigerian Upstream Cost Optimisation Programme on Tuesday in Abuja.

Silva reminded Nigerians there was no provision for subsidy in the 2021 budget, and that the Nigerian National Petroleum Corporation (NNPC) could not continue to bear the cost of under-recovery.

The Minister explained that although the rise in crude oil price has improved government’s revenue, it could not be frittered away in subsidy payment, as the NNPC must think towards optimization of product cost.

Silva said: “As desirable as this is, this has serious consequences as well on product prices. So we want to take the pleasure and we should, as a country, be ready to take the pain.

“Today, the NNPC is taking a big hit from this. We all know that there is no provision in the budget for subsidy.

“So, somewhere down the line, I believe that the NNPC cannot continue to take this blow. There is no way because there is no provision for it.

“As a country, let us take the benefits of the higher crude oil prices and I hope we will also be ready to take a little pain on the side of higher product prices.”

In the meantime, the NNPC has called on stakeholders in the oil and gas industry to join in working towards reducing operations cost to achieve the $10 or less per barrel production cost target.

The Group Managing Director of NNPC, Malam Mele Kyari, said the current reality dictated by the global energy transition and demand erosion occasioned by the COVID-19 pandemic has made cost optimization imperative.

“It is in our informed interest to optimize our cost of production.

“The realities of energy transition and investor choices are very much clear to us. There is nowhere in this world where a less cost-efficient operator can survive today,” the GMD posited.

He called on industry players to adopt measures such as transparency, collaboration, efficiency and shared services to help in driving down cost in order to meet the target.

Kyari disclosed that under the NNPC operational theme for the year, known as ‘Execution Excellence’, the Corporation would achieve a contracting cycle of six months or less which would help create efficiency and drive down unit operating cost to sub $10 per barrel level.

In view of Federal Government’s projected fuel price increase, the Trade Union Congress (TUC) has said Nigerians were bearing a pain that was needless from a government that was far from merciful.

President of TUC, Comrade Quadri Olaleye, who expressed shock over the revelation of an impending fuel price increase due to the crude price increase in the international market by the Minister of State for Petroleum, Sylva, said Nigerians were under the yoke of an artificially created pain.

In a statement made available to newsmen in Abuja, he appealed to the Federal Government to have a change of heart, considering the level of poverty and suffering majority of Nigerians were grappling with.

He said: “The question is why is government always quick to tell us about the rise in the price of crude in the international market and the need to increase the price of PMS; but it takes them weeks and sometimes months to implement agreement reached with the organised labour? It all points to one thing: they have no mercy for the poor people of this country.

“In every move and statement by government officials, you could see and feel their carefree attitude and indifference to our plight. It appears they are not disturbed by the povertyridden plight of Nigerians and the unemployment/insecurity situation that their obnoxious policies have created in the country.

“There is nothing honourable about what the minister has said Nigeria is among the top six oil producing countries in the world.

“Reports have it that our oil is one of the best, giving us an edge over others. Unfortunately, we have not taken advantage of that. We have four refineries that are not functional. Why are they not functional and why is government closing its eyes to it?

“Their refusal to attend to them is reason why the country is subjected to the vagaries and volatility of the price of crude in the international market.

“Nigeria is now depending on Dangote and Niger Republic refineries to supply us fuel! Dangote is an individual while Niger Republic is far less than Lagos in population.

“The pain the masses of the country bear is a needless one. It is artificially created. The TUC, nay organised labour is trying seriously to avert a major industrial crisis.

“We have tightened our belt so hard to the extent that we are finding it difficult to breathe, but the government seems not to care. Government’s knee is on our neck and we are appealing to them to have a change of heart.” 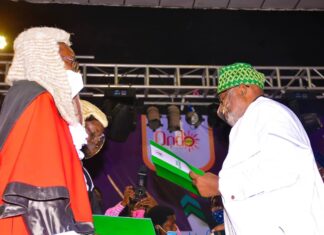 KAFTANPost - February 24, 2021
0
By Temitope Adedeji  The newly sworn in governor of Ondo State, Rotimi Akeredolu has promised to build a new Ondo state. The governor made the promise...