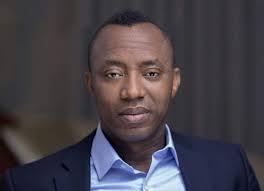 The presidential candidate of African Action Congress (AAC) in the last general elections in Nigeria, Mr Omoyele Sowore, was on Saturday abducted by unknown gunmen at his home.
The News Agency of Nigeria (NAN) reports that Sowore called for a mass protest on Monday at the National Stadium, Surulere, tagged: “Revolution Now”.
The Chairman, Committee for the Defence of Human Rights (CDHR), Lagos State Branch, Mr Alex Omotohinse said in a statement on Saturday that Sowore was abducted at his residence and taken to an unknown destination.
Omotohinse called for the immediate and unconditional release of Sowore, who is also the founder of Sahara Reporters, an online media platform.
The CDHR chairman further alleged that Sowore had been rendered incommunicado as all his mobile phones were seized by the abductors.
All efforts to get reaction from Lagos command of the DSS were not successful to confirm if its operatives were involved in the incidence.
Similarly, calls and text messages to the DSS spokesman by News Agency of Nigeria (NAN) in Abuja was not responded to.
However, the spokesman for the police in Lagos, DSP Bala Elkana said Sowore was not arrested by the police.

Evacuated Nigerians would get passes to destinations after quarantine – Onyeama