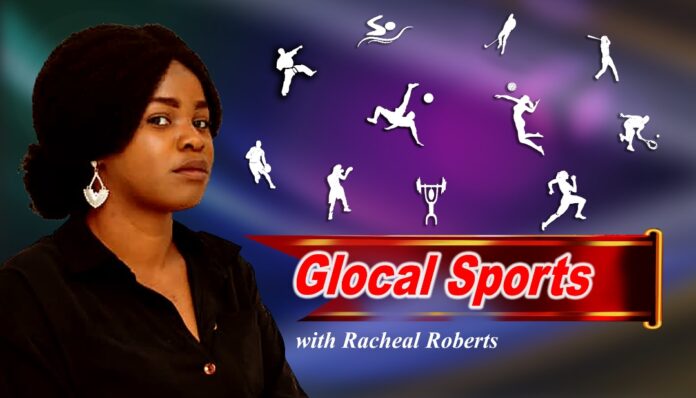 Sports cars are a love for many people across the globe. The fiery horse engines, radiant gloss paintings, rugged body with sturdy aesthetics, and unbeatable speed of these vehicles make sports cars unique in their own way. While motorsports and the production of sports cars in West Africa are unpopular, a few Africans have broken the mould to put sports cars made in Africa by Africans on the world map. 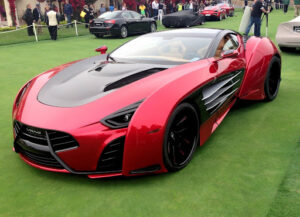 In the early 70s, vehicle manufacturing through Completely Knocked Down (CKD) assembly gained notoriety under a military government looking to kickstart the Nigerian automobile industry. At the time, brands like Volkswagen and Peugeot assembled vehicles in Nigeria, with some of the components sourced or manufactured locally. These include; tyres, windshields, and windows from Triplex Glass (Ibadan), paint from Berger Paints (Lagos), and batteries from Exide Nigeria LTD (Ibadan). However, a decline in production, several economic recessions, and a lag in technological advancements later hindered those efforts.

Motorsports refer to the group of competitive sporting events that primarily involve the use of motorized vehicles. Race cars are used mostly in motorsports contests, and their engine power output is substantially higher than that of a conventional sports car. In West Africa, efforts to uplift sports are underway, and can be traced to the efforts of a few innovators: 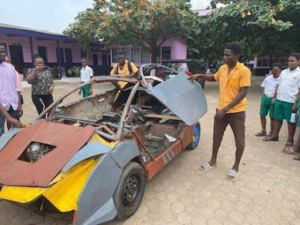 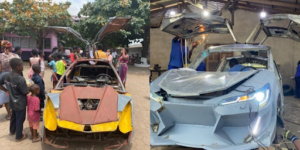 In September 2020, a video that showed 18-year-old Kelvin Odartey, a Junior High School (JHS) student driving to school in an automobile made out of scraps went viral. Kelvin received considerable admiration on social media for driving his self-built car, the Akofena, to an exam location to complete his final paper.

The young innovator was awarded a scholarship by Kwadwo Safo Junior, Owner, and CEO of Kantaka Automobile Company in Ghana, with a pledge to scale his automobile manufacturing efforts with a remake of the Akofena. By the end of November 2020, the Akofena had been fully remade and later dubbed ‘The Kantaka Akofena’ 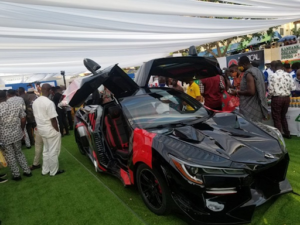 The Bennie Purrie is a red sports car made in Plateau state, Nigeria, and is composed of recyclable materials that make it environment-friendly. To protect the car’s hood and exterior, the Bennie Purrie uses recycled fiberglass, commonly known as reinforced plastic, rather than materials like aluminum alloy or galvanized sheets. 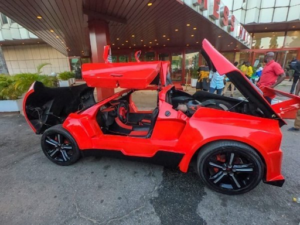 The car’s first model features a 2.0-liter engine that produces 130 horsepower and can go from 0 to 120 kilometers per hour in 12 seconds. One of the safety benefits of having a plastic car is that it will break down as if it were made of glass, as opposed to a metal car, which will crumble when it collides with a resisting force.

Some of the more-recent racing series in West Africa are following in the steps of Nigeria’s RoadX Race Series which takes place at the Motorsport Raceway, Evbuobanosa, Edo State, and the Fanfaro Auto Rally in Ondo State that is open to almost any kind of vehicle. An appraisal of motorsports in west Africa shows that although many people consider it for fanfare, there is a general lack of interest, heightened concerns about safety, and a large individual cost attached to this version of adrenaline sports.

Speaking on heightened safety concerns, the risk is mostly in amateur events. Incidents at the top professional level are quite rare because there is money and resources to invest in new technology, research, and implementation of sophisticated safety measures. This can be the same in amateur races as safety awareness is prioritized and taught from the early stages of racing.

When these concerns are cast against the grim reality of the developing West-African economy, lack of awareness, sponsorships, and infrastructure to harness motorsport talent in the region, apathy develops.

“I wouldn’t say there is a lack of interest in Africa entirely. If you go to South Africa, the motorsports scene is thriving and plans to bring F1 back to the country. In West Africa, maybe the government hasn’t seen the potential in motorsports tourism.” Theodore “Theo” Samouris, Vice President of the BMW Club, Nigeria tells us in a phone chat. Samurais is a long-time lover of motorsports and a BMW fanatic. In Nigeria where the following for motorsports and cars is ever growing, BMW events are free of charge and open to BMW owners and lovers.

Around the globe during the COVID-19 outbreak and with people on lockdown, different sports, motorsports included, became a source of entertainment and a slight escape from the grim reality that had hit us. Not much happened in West Africa, but events like the World Rally Championships (WRC) returned to Kenya in 2021 after 19 years. Kenya is now set to host the Safari Rally for the next 5 years, till 2026. The country has a lot to offer with different terrain and cultural experiences for the thriving sport.

Motosport clubs could however use more brand sponsorships to fund racing events and motorsports tourism in general. These events and human capital will give sponsoring brands the platform to promote safe driving within a diverse advertising demographic.

For those insisting that motorsports are dangerous or high-risk activities, experts say that safety measures can be put in place to allay fears. While speaking with Robson Omasheye, Director at Fastlane Motorsports and 2019 Campion of the RoadX Racing Series in Nigeria, we gained more insight into the growing trend of motorsports in West Africa, and how efforts to make racing enjoyable begin with a safety-first mindset.

“At the previous Autofest, we had marshals from the Lagos State Traffic Management Agency (LASTMA), with Police and health and safety (HSE) marshals on the ground, but there is only so much that these people can do, compared to risks posed by the crowd of spectators who want to get the best views,” Omasheye said while describing risk mitigation strategies deployed on race day.

Across the world, accidents do happen and motorsports should only be done within a controlled atmosphere. Omasheye says that Fastlane has been fortunate not to record any gory incidents. He credits the success to support from sponsors, improved locations, and safety marshals.

The future of Motorsports in West Africa

The low popularity of motorsports in Africa is not only due to its capital-intensive model. From building race tracks to buying cars and coordinating events, many West Africans lack food and daily sustenance, coupled with heightened spiritualism, to see car racing as a priority. By participating in motorsports or adrenaline sports of any kind, one is simply putting his or her own life at risk. In West African consciousness; it is not worth it.

Side talks about death looming around young people that want to practice motorsports have not stopped lesser versions of the adrenaline sport like ‘Drifting’ from permeating West African communities. Drifting is a car race technique that requires all full focus and angular-speed calculation to rotate a car 360 degrees in quick bursts.

In a worldwide study commissioned by The Fédération Internationale de l’Automobile (FIA) and carried out by EY-Parthenon, the economic and social impact of the motorsport industry is estimated at about 160 Billion Euros.  The total gross output annually is also the harbinger of approximately 1.5 million paid jobs. This lays claim that motorsport can contribute to the rebound of the West African economy in post-COVID-19 times.

I think it is equally important to talk about women in motorsport. In the future, we can expect more women to participate, and Africans, in general, to feature in international motorsports. There is hope for Africa advancing and being an independent hub for motorsports with racing series that could foster equitable partnerships to build on sports tourism for the economy.

This is also a way of engaging the youth in something that is fun and constructive. There are several opportunities in motorsports that need to be explored. A team doesn’t just have a driver and mechanics. There are team leaders, strategists, data analysts, engineers, PR, and social media managers, event planners e.t.c to create a more diverse job market.

There is an enormous amount of value that motorsports can brings to the tourism industry in West Africa. By harnessing talent, attracting sponsorship, and advertising, there will be credible outlets for job creation in the transportation, logistics, and hospitality industry.