Home Energy/Oil and Gas ‘We have received the report of Technical Committee on PMS Pricing Framework’...
Facebook
Twitter
Pinterest
WhatsApp
Factual Pursuit of Truth for Progress

The report of the Technical Committee on Premium Motor Spirit (PMS) Pricing Framework alongside Organised Labour has been received by the Federal Government.

This was made public in a statement by the FG on Wednesday, after a joint meeting between the Federal Government and Organised Labour in Abuja.

The Minister for Labour and Employment, Dr. Chris Ngige, stated that the meeting had been adjourned to 22 February 2021 when the FG would deliberate on the report.

“The Committee on Petroleum Pricing has finished their work and sent in their report. We have received and adopted the report.

“Labour asked for some time to subject the report to their various organs. It is a technical report, so they need further elucidation from their technical and research teams,” Ngige said.

Speaking further, Ngige added that the report of the Technical Committee on Electricity Tariff would be ready in a week’s time, while adding that the report would be reviewed together with that of Petroleum Pricing on 22 February.

In his remarks, the President of the Nigeria Labour Congress (NLC), Comrade Ayuba Wabba, said Organised Labour unions need to implement a clear position that would benefit the masses.

“The whole essence of what we are arguing about is how to bring not only price stability but also affordability.

“Our pledge on the government side is that whatever decisions are reached, we will ensure that government honors its own part of the bargain so that we can maintain and sustain industrial harmony in our nation,” he added.

It would be recalled that the Federal Government inaugurated the Technical Committee on Pricing Framework for Premium Motor Spirit (PMS) otherwise known as petrol.

The Committee has a mandate of coming up with a strong framework for PMS price modulation. 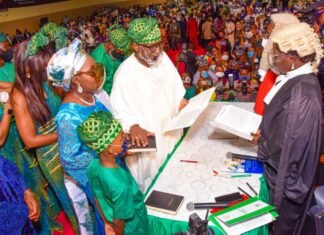 KAFTANPost - February 24, 2021
0
By Temitope Adedeji Governor Oluwarotimi Akeredolu (SAN) of Ondo State and his Deputy, Lucky Aiyedatiwa, on Wednesday took their oaths of office to pilot the...