A midnight fire at a motorcycle spare parts factory in Nnewi, Anambra State has reportedly destroyed properties worth over N500 million. The facility was part of Louis Carter Industries Nigeria Limited.

Eyewitness reports say the fire started around 10pm on Saturday, and burnt intensively for six hours despite interventions by fire service men who arrived one and a half hours late.

The General Manager of the company, Mr Ndubisi Okoli, said he was alerted by the company’s security men who said the blaze could not be contained with the factory’s fire extinguishers due to the intensity of the fire.

He attributed the fire to a spark on a high tension cable of the Enugu Electricity Distribution Company (EEDC).

Okoli said: “The high tension cable sparked and spread fire to a section of the factory which destroyed raw materials and crushed machines worth over N500 million.

“Though no life was lost, the building was completely razed,” Okoli added.

While lamenting the degree of damages, the Chief Executive Officer of Louis Carter Group of Companies, Chief Louis Onwugbenu, said, “Only God knows how much it will cost me to rebuild the factory. Worse still is the number of workers that have been thrown out of job as a result.”

He appealed to Governor Willie Obiano for assistance, while pleading for the reconstruction of the road leading to the company from the major highway.

Recall that several businesses in the past few months have lost valuables in millions to fire outbreaks and explosions with many lamenting delays in arrival of fire fighters to salvage properties. 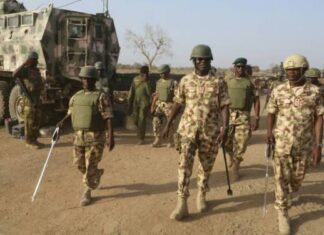 KAFTANPost - March 7, 2021
0
In a major reshufflement, the Chief of Army Staff, Lt.-Gen. Ibrahim Attahiru, has approved  the appointment and reployment of some senior officers in the...

COVID-19 vaccine has no side effects on Buhari – Presidency

State policing is way we must go — Osinbajo

COVID-19 vaccine has no side effects on Buhari – Presidency