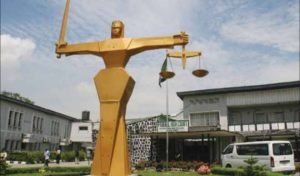 A 62- year-old man, Morenikeji Adebayo, who allegedly defrauded a man of N1.2 million on false pretences of selling a used Toyota Highlander Jeep to him, was on Wednesday docked at an Ikeja Chief Magistrates’ Court.

The defendant, a car agent, who resides at 27, Holyness St., Area 1, Meron Estate ,Ogun State, is being tried for obtaining by false pretences and stealing.

The Prosecutor, W/Sgt. Chekube Okeh, told the court that the offences were committed in June 2018 at 31 Road, Gowon Estate, Egbeda, Lagos.

Okeh said that the defendant obtained N1.2 million from the complaint, Mr Chukwuma Okafor, on false pretence of selling a used Toyota Highlander Jeep to him.

“Thereafter, the defendant did not produce the Jeep nor pay back the money and all efforts to locate him failed.

“The case was reported at the police station and since then the defendant has not been seen until the police got a useful information on his whereabouts and he was been tracked and arrested,’’she said.

The offences, according to the prosecutor, contravened Sections 287 and 314 of the Criminal Law of Lagos State, 2015.

The defendant pleaded not guilty to the charges.

She adjourned the case until Nov. 4 for mention.

Court remands ex-policeman for alleged murder of footballer in Ogun

ADMIN - May 31, 2020
0
Nigeria on Saturday recorded a disturbing spike in Coronavirus cases, with 553 new cases confirmed in 14 states and the federal capital territory (FCT). This...

Crude Oil: Nigeria to crash production cost to $10per barrel by...