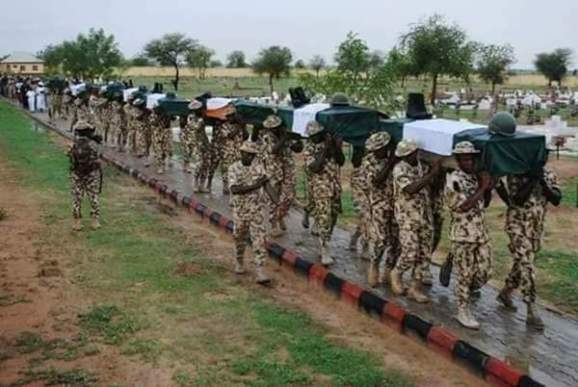 At least, 366 soldiers, policemen and members of the civilian joint task force were killed in ambushes laid by terrorists in the North-East and the North-West between 2019 and 2021.

This is according to figures released by SBM Intelligence.

The data shows that 337 soldiers, 29 cops and civilian JTF members were killed, while 111 others were eliminated by the terrorists.

The report added that 92 terrorists were eliminated, while in all, 569 persons were killed in several ambushes within the same period.

A breakdown of the statistics showed that the biggest single onslaught against the military was in the Goniri area of Yobe State on March 23, 2020, wherein about 70 soldiers were killed.

On July 7, 2020, in the Damboa Local Government Area of Borno State, 30 soldiers and 12 policemen were killed along with three terrorists.

Between September 16 and 24, a space of eight days, about 49 soldiers and two policemen were killed in the Monguno and Marte local government areas of Borno State.

The report added that eighteen soldiers and six policemen and members of the civilian JTF were killed in the Kukawa Local Government Area of Borno State on September 2 and 3, 2020.

Despite the killing of soldiers, however, many of the terrorists are reported to have surrendered in recent times due to the attack on Boko Haram strongholds, while the sponsors of the terrorists remain unknown.

The National Security Adviser, Maj, Gen. Babagana Moguno (retd.), had said last week, “In recent months, there has been an endless mass surrender of terrorists and their sympathisers in the North-Eastern part of Nigeria. Currently, over 15,000 people have been received.

“It is important to note that the combination of kinetic and non-kinetic measures largely contributed to this wave of surrender.”