Kwara State Governor Abdulrahman Abdulrazaq has announced his plans to approach the State House of Assembly to repeal the law granting pensions to former governors and their deputies in the state.

In a statement on Friday by the governor’s chief press secretary Rafiu Ajakaye, Abdulrazaq said he would send a bill to the assembly next week, requesting the lawmakers to immediately repeal the law.

The decision, according to the statement, was in line with the governor’s campaign mantra and proof that he recognised himself as a product of democracy.

“The governor has listened to voices of the majority of the citizens opposing the pension law for former governors and deputy governors.

“As representatives of the people, the lawmakers would exercise their discretion to call a public hearing on the topic to further harvest wider opinions on the topic,” the statement read.

“However, the governor feels it is time for the law as it is to give way. He would rather the state commits the scarce public funds to tackling the question of poverty and youth unemployment,” Ajakaye added.

The move, if granted by the assembly, will bring a stop to benefits given to former governors Bukola Saraki, Abdulfatah Ahmed and others.

Recall that Lagos State Governor Babajide Sanwo-Olu had made similar moves earlier in the week while presenting the 2021 budget of N1.155 trillion.

Covid-19: ‘We are not out of the woods yet’ – PTF warns Nigerians 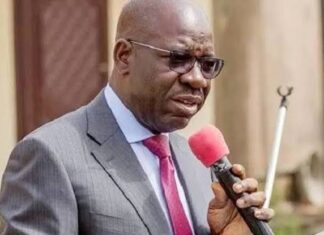 webmsater - November 14, 2020
0
Edo State Governor, Godwin Obaseki, has reappointed Osarodion Ogie as the Secretary to the State Government. The governor announced the appointment on Saturday via his...