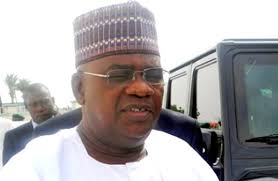 The All Progressives Congress (APC) in Gombe State, on Thursday, has urged the former governor of Gombe State, now Senator representing Gombe central, Danjuma Goje, to quit the stage while the ovation is loud.

Speaking on behalf of the party, Publicity Secretary, Moses Kyari, said the former governor should allow the current governor run the affairs of the state without interference.

Kyari made this disclosure at the party secretariat, while fielding questions from journalists on the purported resignation of Yalmatu Deba ward executives following Governor Muhammadu Yahaya’s perceived disaffection with his erstwhile boss, Goje.

According to him, Gombe State is not Edo, noting that the former governor should quit flexing relevance with the current governor.

Recall that the party had, on November 6, demanded an apology from Goje, following their press statement position that the former governor invaded the state with kalare (militia youths) to disrupt peace of the state.

According to Kyari, “Like a true law abiding institution, we are going by the constitution of the party.
We have asked him to come and apologise but he is yet to apologise as we speak.

“The party has set up a committee that is going to write him formerly about the complain and we expect to hear from him after which we shall use constitutional means of addressing the matter. Politics is all about persuasion and development.

“The government of Muhammadu Yahaya has brought positive development to the people of Gombe State. Certain individuals feel it is their right to control power, no it is not true. They said you leave the stage when the ovation is loudest so that you can be recorded and remembered tomorrow. But you have played your role and you want to play another person’s role, this is what we say no to, like some people will tell you, Gombe no be Edo.”

Commenting on the alleged resignation of executive members of the party, Kyari waved it off, adding that, “We invited you this evening as a result of the dangerous and malicious rumour circulating on the social media that all the members of the 11 wards in Yalmatu Deba Local Government have resigned party positions in solidarity with Sen. Danjuma Goje, it is not true, it is lie from the pit of hell.

“The people involved have come to address a press conference, the people that supposedly resigned came to debunk the allegation and to tell the story of what actually transpired. Some of the persons whose names are seen on this list are not even in town. They are sick and could not go out, so how did they arrive at the list?”