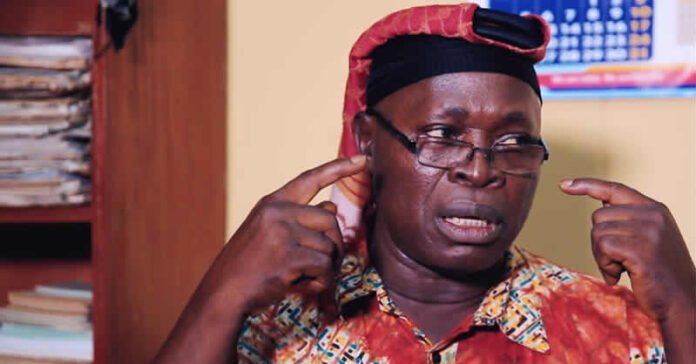 Akinotola said this in a statement issued on Wednesday in defence of Pantami, who is also an Islamic scholar.

Some newspapers had reported that the minister was on the watch list of the United States for his alleged ties with Boko Haram insurgents.

The newspapers which published the report have retracted it.

“It is fake news. It is a lie from the pit of jahannam. It is a product of malice, envy and evil desire concocted in the laboratory of the notorious ‘pull him down’ (PhD) syndrome. It exists only in the imagination of the authors of the evil plan. It will not stand the test of authenticity,” he said.

He continued, “Pantami is a honest, dilligent and uncommon Islamic scholar whose ability to combine his discipline with digital expertise has raised him above his peers and made him an indispensable asset to this country. It is only people with diseased minds who do not want progress for Nigeria that can make such malicious yet false allegation against him.

“We have been reading Pantami’s articles and watching his lecture videos long before he became minister and on no occasion did he pour encomiums on terrorists or their aides. On the contrary, he always condemned violence and terrorism. Therefore, those who claim that Pantami ‘spoke glowingly’ of associates of terrorist leaders are apostles of Lucifer and pathological liars.

“In fact, Dr. Pantami removed the rug from under the feet of Yusuf, the erstwhile leader of Boko Haram. This he did in several debates during his days as a university lecturer and those video tapes are still available for all to watch.

“We believe that Pantami’s detractors are after something else, otherwise the threat issued by Shekau, the current leader of Boko Haram, against the person of Dr. Isa Ali Ibrahim Pantami would have been enough to dissuade them from embarking on this futile attempt at damaging the reputation of a great scholar and a patriot nulli secundus.

“Shekau’s threat against Pantami was made openly in a video clip on 13th February, 2021 (just two months ago) and it was public knowledge at the time. It prompted the Nigerian authorities and friends of the minister to urge him to take adequate security measures around his person and family members. Is it not paradoxical that the same Pantami whom terrorists threatened to kill is now being accused of being a sponsor and ally of terrorism? It is highly illogical.

“We strongly suspect that those behind the fake news are jittery over the minister’s revolutionary ideas particularly the ongoing linkage of the NIN with SIM cards. This development is believed to be giving criminals sleepless nights as it is capable of exposing their identities. This fake news is therefore an attempt to blackmail him into stopping the revolutionary linkage of the NIN to the SIM. Nevertheless, the fact that the United States embassy has dissociated itself from the allegation thereby giving the minister a clean bill of health is didactic and reassuring.

“MURIC is constrained to react to the fake story not only because of our deep commitment to upholding the truth and defending the innocent, but also because we have also been victims of such malicious and damaging false allegation in the past.

“We recall the false accusation against us that our director, Professor Ishaq Akintola, collected $200,000 from ISWAP and Boko Haram. Those behind the allegation could not substantiate it and nothing was heard of them again. We knew at the time that it was an attempt to blackmail us into silence but we refused to be silenced by men of evil. We denied the allegation and we forged ahead with the protection, promotion and projection of Allah-given and fundamental rights of innocent Nigerians.

“We therefore advise Dr. Pantami to ignore his detractors and continue the good work which he is doing for the country. Nigerians are proud of him. Nigerians are praying for him. Nigerians repose their full confidence in him. MURIC is solidly behind him in his efforts to digitalise the economy and rid Nigeria of criminals and unscrupulous elements.”