Parents of the abducted students of the College of Forestry Mechanization Afaka in Kaduna State have occupied the National Assembly complex, Abuja, in protest.

The protesters, which include members of the Students Union Government (SUG) of the institution, are lamenting over what they described as the negligence of the state and Federal Government in securing the release of the children.

They chanted songs of solidarity and displayed placards demanding prompt rescue of the students. 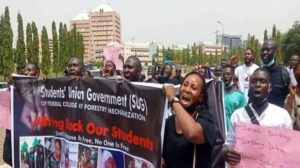 The main entrance of the National Assembly was however manned by security agents who denied the protesters entrance.

Recall that in March, 39 students of the institution were abducted from their hostels by bandits dressed in military uniform.

Ten of the students were released in two batches of five each but 29 others have remained in captivity.

Meanwhile, Nigerians have expressed apprehension on Twitter following a threat by abductors of students of Greenfield University, Kaduna that the remaining students in their custody would be killed today.

At least 23 students including a staff of the privately-owned university, located along the Kaduna-Abuja Highway were abducted from the school on April 20, 2021.

Speaking with the Hausa service of Voice of America, the gang leader Sani Jalingo demanded a ransom of N100 million and 10 motorcycles.

Jalingo warned that failure of the Kaduna State Government or the students’ family to meet their demands by Tuesday would lead to the killing of the students in their custody.

He insisted that if their demands were not met trucks would be used to evacuate the lifeless bodies of the remaining students.