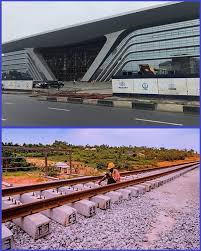 President Muhammadu Buhari is currently on official visit to Lagos on Thursday for the inauguration of the 157-kilometer Lagos-Ibadan standard rail project at the Mobolaji Johnson railway station in Ebutte Metta.

The Personal Assistant to the President on New Media, Bashir Ahmad, had hinted on Wednesday that the President is also expected to move on to the Energy Nature Light Terminal of the Apapa Port to further commission the Integrated National Security and Waterways Protection Infrastructure, otherwise known as the Deep Blue Project.

Ahmed, on his Facebook page, said, “Construction started in March 2017, and test-running commenced in December 2020. The Ebute Metta Station, known as the Mobolaji Johnson Station, is the largest railway station in West Africa with a holding capacity of 6000 passengers.

“President Buhari is committed to developing a modern national railway network that will connect every part of Nigeria, and promote trade, travel, tourism, commerce and national integration.”

Reports say President Buhari is expected back at the State House, Abuja, later on Thursday, after the inauguration of the projects.