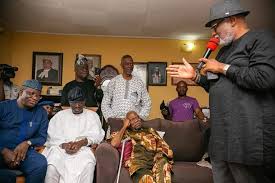 Gov. Oluwarotimi Akeredolu of Ondo State on Monday said that governors in the South West Zone would tackle the security challenges confronting the region.

Akeredolu gave the assurance in Akure during a visit to Chief Reuben Fasoranti, a leader of the Yoruba socio-cultural group, Afenifere, after the burial of his daughter, Mrs Olufunke Olakunri.

The News Agency of Nigeria (NAN) reports that 58-year old Olakunri was shot dead by unknown gunmen on July 13 on the Benin-Ore expressway.

Speaking on behalf of other South West governors, Akeredolu, who admitted that the region was confronted with security challenges, expressed confidence that those responsible for the murder of Olakunrin would soon be arrested.

“It is a serious security challenge but we are prepared to face the challenge, don’t doubt it.

“Something drastic and urgent has to be done and we are determined to do it, there is no other way.

“This incident happened in Ondo State and I have responsibility of security of lives and properties in the state.

“We want to give our words to get to the roots of the incident and get those responsible.

“We are not resting on our oars and we are prepared to meet these challenges with everything we have,” he said.

Responding on behalf of Fasoranti, Chief Sehinde Arogbofa, General Secretary of Afenifere, expressed gratitude to Akeredolu for his remarks which he described as heartwarming.

“We thank you for giving us this kind of confidence. We now expect action, we know it’s not very easy but that is what this old man has been fighting for, to make sure that all is good for this country.

“Now that you have assured us that the death of our daughter will not be in vain, we thank you very sincerely,” he said.

Earlier, Bishop Simeon Borokinni of the Akure Diocese of Anglican Church of Nigeria at the burial service for Olakunri had appealed to the governors and leaders present at the event to improve security in order to check the killings.

“We call on God and our government to do the needful because millions in the land are wounded and broken, and need healing.

“As a nation, we need to look unto God. It is then we will recieve healing as a nation.

” Fortunately, some of the leaders are here,” he said.

Borokini, who described the deceased as a prominent daughter of Akure, added that she was a constant source of joy.

The burial service, which held at Saint David Cathedral, Akure, had many dignitaries in attendance, including Gov. Babajide Sanwo-Olu of Lagos State, Gov. Dapo Abiodun of Ogun, Gov. Seyi Makinde of Oyo State, Gov. Kayode Fayemi of Ekiti and Akeredolu of Ondo State.

NAN reports that the five governors immediately retired to the Ondo State Government House for a closed door meeting. 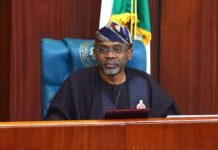