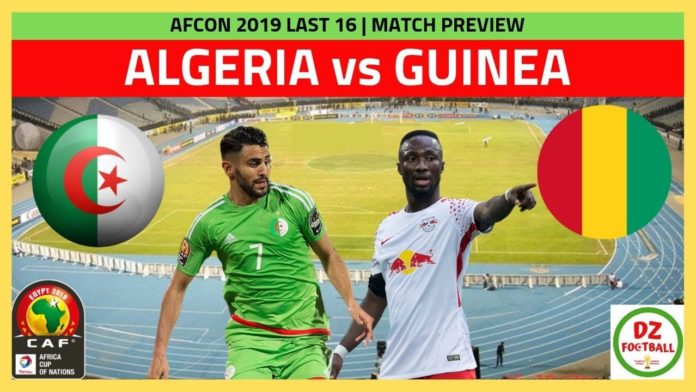 Superbly-taken goals from Youcef Belaili and Riyad Mahrez set Algeria on the way to a comfortable 3-0 win over Guinea as they reached the Africa Cup of Nations quarter-finals on Sunday.

The resounding victory thus reaffirmed their status as one of the favourites for the title.

The previous five round-of-16 ties had produced a heady mixture of shocks, drama and comebacks.

But Sunday’s match was straightforward as Algeria, yet to concede a goal, won their fourth straight match at the tournament.

The Desert Foxes were strong in defence, intelligent in midfield, ruthless in attack and played with a swagger that suggested they believe they are on course to claim the cup again.

Belaili broke the deadlock after playing a one-two with Baghdad Bounedjah in the 24th minute and Mahrez, following some sublime control, lashed home the second just before the hour.

Substitute Adam Ounas added the third on the break in the 82nd minute, making him joint tournament top-scorer with three goals alongside Senegal’s Sadio Mane and Nigeria’s Odion Ighalo.

Algeria, whose one previous title came in 1990, will face either Cote d’Ivoire or Mali in the quarter-finals.

On Sunday they were quickly on the attack as a ball floated over the Guinea defence was chested down by Bounedjah but he fired wide.

Guinea’s attacks mainly consisted of long balls aimed towards Jose Kante but he got little change out of the Algerian defence.

A period of sustained Algeria pressure led to the first goal.

But there was no let-off from the next superbly-executed move as Belaili exchanged passes with Bounedjah before slotting a low shot past Kone from a narrow angle.

After a scrappy start to the second half, Mady Camara gave Rais Mbolhi something to do with a long-range shot which the Algeria goalkeeper turned over the bar.

But Guinea were soon on the rack again.

Bennacer found Mahrez with a pass across the face of the penalty area and the Manchester City player caressed the ball past a defender before sending Kone the wrong way from 20 metres.

Algeria spent the rest of the match stroking the ball around.

But there was time for a third when Youcef Atal won possession, burst down the flank and laid the ball into the path of Ounas to score from close range. 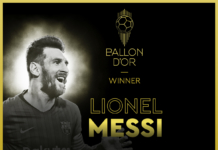 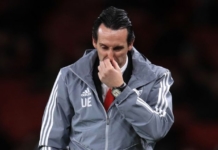 Arsenal’s next boss: the leading contenders