According to Aisha Yesufu, for us to truly build a nation where peace and justice shall reign in fulfillment of the second stanza of our national anthem, we must work to make sure Nigeria becomes a country where the son/daughter of a nobody becomes somebody without knowing anybody. The only thing holding us from achieving that is;

WE ARE ALL SARS

Young people raised about N25m for protest and protesters are testifying to the impact of the disbursed fund on food and medical supplies, yet the federal government allegedly disbursed N600bn as COVID-19 palliative and no single Nigerian benefited.

Rotimi IDOWU, (best graduate of OAU Law Class of 1990) said recently, Leadership confers a responsibility to be above board. It is a calling. A calling to be different, by whatever means possible. It could be by training, counsel, coaching, etc. IF YOU CANNOT LEAD BY EXAMPLE, DO NOT ACCEPT LEADERSHIP RESPONSIBILITY!!!!

Even if the whole society is bad, and it is the pool from where our leaders are chosen, it still does not excuse bad leadership.

To say that leaders cannot be different because they are from a rotten society begs the true definition of leadership.

So we should remember that when we collect money for a job or road construction and refuse to execute the job which eventually leads to the death of innocent people, or as a civil servant you collect kickbacks and over invoice contract papers thereby making it impossible to execute other jobs, you are worse than SARS.

As a politician, be you Senator, Honourable or unable member, President, Governor or just Chairman or councilor, and your salaries and allowances are 100 times more than that of the people you represent, yet you still circumvent the process to enable you steal from public purse. There’s no difference between you and the gun throttling SARS.

As a lawyer or Judge, when you collect money to trade off judgements and grant electoral victory to someone rejected at the poll, or make someone who didn’t participate in the election process a Governor, President, Senator or Lawmaker, and he eventually takes decision that will affect thousands of people. There’s no hiding from it; you are SARS.

An employer who uses staff like slaves and still refuses to pay them their salaries or entitlement is worse than SARS.

A lecturer or employer who request for sex or money in return for marks or employment is definitely not different from SARS even though he is not carrying a gun.

A police IG or Commissioner who receives police budget and fixes it in an interest yielding account while collecting the interest therein upfront, yet the rank and file under him or her are left to suffer, is the meaning of SARS itself.

A medical doctor who after swearing to the Hippocratic Oath still watches people die carelessly while insisting on payment of bills before treatment, is a practicing SARS member.

As a regulator, or custom, immigration, government department, ministries, agencies ICPC, EFCC, Civil defense etc. and you use your job to oppress, harass and intimidate people, if someone calls you SARS, answer him because that’s what you are.

People work tirelessly for 35yrs in government and they have to die by installments before you pay them pension, while SARS kills 10, with your pen or inaction, you have killed 100s.

As a supporter of politicians, you criticized everything government did while in opposition only to support everything you once criticized once your candidate is in govt and vice versa, infact, you are SARS personified.

You are a religious cleric flying private jet while your congregation are smelling of poverty, SARS is the full meaning of your church or mosque.

Finally, you that increased tariffs in the mist of a pandemic is worse than SARS. The list is endless.

I will therefore advocate that as we protest for a better policing and society, we must also remember that our workers, politicians, lecturers, civil servants, judges, lawyers, Doctors, police etc. are drawn from amongst us and it’s those little injustices that we failed or neglected to address years ago that became the convention of today that we are addressing now. Let’s all start anew, with a new orientation and a new social order.

That social re-orientation can begin when we reduce the salaries and allowances of our public office holders and cut wastage. We would have enough funds to plough into other sectors of the economy.

If government treats everyone as a stakeholder in the Nigerian project and we collectively see ourselves as such and all do our bit whether anybody is watching or not, we would have reduced the SARS in our lives without having to change the name from SARS to SWAT.

Let’s all refuse to be the SARS in the lives of others.

#EndSARS is not just about Police Reform, it’s about the long-awaited Nigerian Revolution 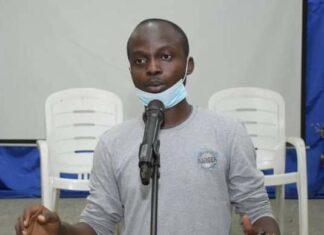