Nigeria’s maritime sector played host to a big visitor to the country’s seaports with the berthing of the 300m long and 48m wide Maerskline Stardelhom at the Onne Port Port Harcourt.

The arrival of this huge vessel on saturday 15th of August, 2020 was announced on the official Twitter handle of the Nigerian Ports Authority (NPA), @nigerian ports, and greeted especially on the social media with fanfare as one move towards complying with Federal Government’s plan to decongest Lagos ports by moving commercial activities to the Niger Delta.

Despite the applause that has greeted the arrival of this large vessel, there may be bottlenecks that would be faced in days, weeks, months or years to come.

According to KaftanPost investigations, the vessel may have issues with offloading of the containers as it merely has two functional gantry cranes, barely tall enough to safely offload the containers.

It is believed that with the impending challenges on the clearing, it may just be an open can of worms of a depleted and inefficient maritime sector in Nigeria. This, development experts say, would also hamper the objective of decongestion owing to the volume of containers to be evacuated from the huge vessel.

Many experts have overtime lamented the worrisome state of the maritime sector with dearth of facilities posing huge threats to the ease of doing business especially at the nation’s ports.

This is believed to be a limiting factor to shipping business in the country with many shippers opting to divert cargoes to other countries.

Many have also argued that with the crash in oil prices, the country’s focus to other sectors such as agriculture and maritime sector may need firm and short-term policies that can guarantee quick fixing of the decadence in the non-oil sectors especially the maritime sector and it’s inefficient cargo clearing facilities.

Reports say the country, which has the largest coastline in West Africa with a wide array of maritime professionals and related institutions, may be getting a lot wrong if the objective of achieving ease of doing business is to be achieved and within a record time.

According to recent economic reports, Nigeria’s Ease of Doing Business (EDB) rating dropped in 2016 from 2015, despite a marginal upward shift in 2014.

This development led to President Buhari’s inauguration of the Presidential Enabling Business Environment Council (PEBEC) in July 2016 with the Vice President as the Chairman.

The council comprised of the Minister of Industry, Trade and Investment (MITI) as Vice-Chair, nine other ministers, the Head of Service of the Federation, Governor of the Central Bank, representatives of the National Assembly, and the private sector.

The mandate of the council was to make long lasting recommendations on institutional reforms to promote Nigeria’s investment attractiveness.

Despite the laudable move by the President, internal reports have revealed that there may be policies in favour of achieving positive sector reforms but the political will may be far from the reality on ground especially at the clearing stages of the vessels, storage and other bureaucratic processes that have overtime led to Ports congestion in Nigeria.

Investigations at the seaports show a state of neglect looking too good.
Out of the country’s six seaports, only the Lagos Ports could be seen as operating at full capacity. The six ports include Apapa and Tin Can, both of which are situated in Lagos, one in Warri Port, and one in Calabar, including Onne and Port-Harcourt ports in Rivers State.

A visit to many of these ports show a low level of activity, ranging from obsolete or inefficient machines, power tussles among relevant agencies at the ports, delay in processing of documents, alleged huge taxes on goods.

These, among other issues, according to reports, have led to ports congestion.

Several blames have been issued across boards on the way out of this quagmire with the custodians of the ports taking the most blames and throwing them back to shipping and terminal operators.

At the Lagos Port, for example, an estimated over two million containers laden with various cargoes worth trillions of naira have been literarily ‘lying in state’ or ‘lying in wait’ owing to difficulty of evacuation by importers.

This has led to outrageous billings as demurrage, which keeps accumulating geometrically with no end in sight. This is with a simultaneous outcry by port workers and business organizations, who depend on the value chain of importations for their businesses to survive.

With the arrival of the Maerskline Stardelhom cargo vessel to Onne Port, many would wonder the capacity of the port to manage such diversions of traffic from Apapa ports with the state of efficiency still below average.

What is the readiness and operational capacity of the Port in readiness for the inflow that may come in the years ahead?

How efficient are the decongestion policies and implementation?

How soon can the Federal Government’s Ease of Doing Business (EDB) be achieved with the current state of the nation’s ports?

These are questions begging for answers even as the country celebrates the historic arrival of the giant carrier into the nation’s waterways. 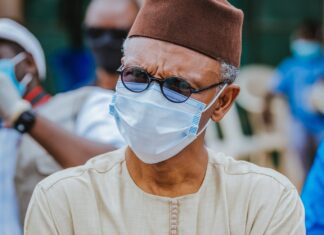 KAFTANPost - November 1, 2020
0
Governor of Kaduna State, Nasir El-Rufai says it is about time to restructure Nigeria in order to ensure equitable distribution of resources across the...

‘Step aside to learn act of governance,’ Obong of Calabar tells...