Manufacturers under the aegis of Manufacturers Association of Nigeria (MAN), are fretting over the dearth of logistic infrastructure in the country, saying that, the multiplier effect is pushing high cost of prices of items in the Nigerian market.

Its Director-General, Segun Ajayi-Kadir, in a chat with this newspaper, also explained that familiar challenges such as bad roads, poor road network, non functional rail system, underdeveloped water ways, and high cost of transportation within the country and ECOWAS are still prevalent on manufacturing.

Particularly, he noted that difficulty in movement of goods across the country by manufacturers due to insecurity and grey levies still persist in the sector.

According to him, logistics cost in the country remained very high, arising largely from the poor state of the roads, saying that adverse effects on transportation and logistics cost on local production are exacerbating on businesses at present.

Speaking further, Ajayi-Kadir explained that logistics cost in Nigeria is causing foreign goods that are coming into the country not to allow local ones competitive in the market again.

“First of all, the logistics cost implication pushes the price of items up in the Nigerian market. And with the way the economy is, the purchasing power of everybody in Nigeria is low. So talking about the large stock of inventories that is a big challenge to manufacturers currently. Even if you say you want to export those items, because a lot of them are exportable, the price cost is still a challenge because the same items coming from somewhere else are found in Nigeria on reasonable price,” Ajayi-Kadir said.

The MAN DG stated that for instance, “in Costa Rica, 2kg of Pineapple goes for 95 penny in the United Kingdom. However, to transport 2kg of Pineapple from Nigeria to United Kingdom is one pound. Why it is like that, is because some obnoxious cost at the airport is responsible for the jerking up in the price of the commodity. “An aircraft that will pay about $35,000 to take cargo from Nigeria, in Ghana, it will cost less than $15,000. Now that explains why DHL cargo planes will come into Nigeria, drop letters and other items, buy sandbags to balance their aircraft and leave the country to Ghana or elsewhere to pick up goods. And of course, because of the foreign goods that are coming into the country have made our local manufactured ones not competitive in the market again.”

On the dearth of logistics around the ports, he said the traffic gridlock at the Lagos ports occasioned by the dilapidated state and smallness of the roads, increase in business activities, unfettered access to the ports by all kinds of actors and absence of alternative routes remain a multidimensional challenge confronting manufacturers. 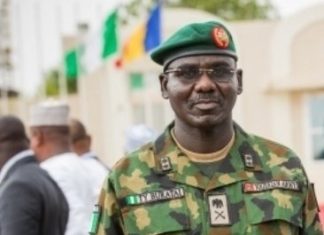 KaftanPost Correspondent with Agency reports - February 21, 2020
0
The Chief of Army Staff, Lt.-Gen. Tukur Buratai, has commended troops of Operation Lafiya Dole (OPLD) for their recent feat in the ongoing counter-insurgency...