Lagos State Governor, Babajide Sanwo-Olu, has expressed sadness over the brutalisation of #OccupyLekkiTollgate protesters by the police last Saturday.

Commissioner for Information Gbenga Omotoso made this known at a media briefing organised by the Lekki Concession Company on Tuesday.

The commissioner explained that Mr Sanwo-Olu never directed the police to assault anyone, adding that the governor would not stand by and watch Lagosians being brutalised.

“The governor is very unhappy with what happened on Saturday, that people were brutalised, and he has directed police commissioner Hakeem Odumosu to investigate the matter. Whoever is found culpable, I assure you, will not go without punishment. This is because Mr. Sanwo-Olu has said it loud and clear that he is not somebody who will abuse the rights of others,” he said.

“That’s why when the whole thing started, you will recall, he joined the protests twice. He waved the flag, he carried the placard and he took the position of the protesters to the President. Besides that, he addressed them. So, he is not going to be the one who will stand by and watch Lagosians being brutalised.”

Scores of protesters were arrested at the protest ground at Lekki toll gate and kept inside Black Marias.

They were later granted bail after being charged before a mobile court in Yaba for conspiracy, conduct likely to cause a breach of the peace, and violation of COVID-19 protocols.

The protesters took to the streets to express their disapproval of the decision of the state judicial panel of inquiry to return control of Lekki toll gate to Lekki Concession Company while the panel’s work was yet to be completed. 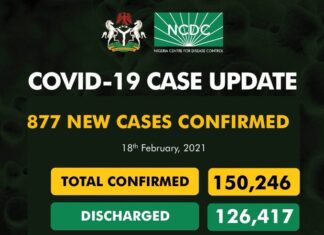 KAFTANPost - February 19, 2021
0
Nigeria on Thursday crossed the 150,000 coronavirus cases mark after recording 877 fresh infections. The country, though, has only about 22,000 active cases. The Nigeria Centre...