The Senate, on Tuesday, received the request from President Muhammadu Buhari for the confirmation of the newly appointed service chiefs.

The request which was contained in a letter dated 27th January, 2021, was read by the Senate President, Ahmad Lawan, during plenary on Tuesday.

According to a statement by Lawan’s aide, Ezrel Tabiowo, the letter from the President, read, “In compliance with the provisions of Section 18(1) of the Armed Forces Act. Cap A20 Laws the Federation of Nigeria 2004, I hereby forward for confirmation by the Senate, the appointment of the under listed officer as the Chief of Defence Staff and Services Chiefs of the Armed forces of the Federal Republic of Nigeria.

The appointment comes after persistent clamour by Nigerians that Buhari should bring in fresh hands in the country’s counter-terrorism war especially in the North-East.

However, Human Rights lawyers including Femi Falana had said the President lacked powers to appoint the new generals without the constitutional endorsement of the National Assembly. 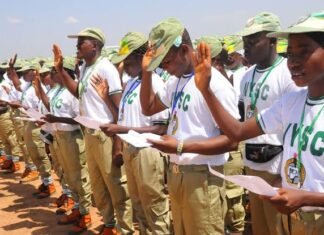 KAFTANPost - February 28, 2021
0
The National Youth Service Corps (NYSC) has told corps members that it did not use their February stipend to pay off bandits. Reports making the...