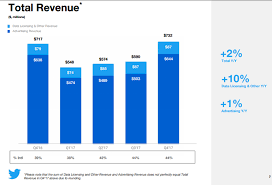 Twitter has reported a jump in profits for the final quarter of 2018,
despite a fall in the number of people using the micro-blogging
platform.
Profits rose sharply to $255m (£197m), more than double the $91m
profit it made a year earlier, as advertising revenues grew.
But Twitter downgraded its revenue forecast for the current quarter.
The company said user numbers were down in the last quarter because it
had deleted millions of abusive accounts.
Twitter removed some accounts after criticism that it was facilitating
political manipulation and hate speech.
Jack Dorsey, Twitter’s chief executive, said “2018 is proof that our
long-term strategy is working”.
“We enter this year confident that we will continue to deliver strong
performance by focusing on making Twitter a healthier and more
conversational service,” he added.
Twitter said revenue in the last quarter had risen 24% to $909m as
video advertising grew.
But the firm said its revenue for the first quarter of 2019 was likely
to fall to between $715m and $775m, lower than the range analysts had
expected.
It also said operating expenses for 2019 were likely to be 20% higher
than the previous year, making it harder to maintain higher profits.
Social media companies have come under pressure to police the content
of their sites more closely after scandals over mental health, user
privacy, hate speech and political campaigning. Twitter said it had
removed millions of abusive accounts as part of its clean-up effort.
Clement Thibault, analyst at global financial platform Investing.com,
said: “Total user numbers are down, but we’ve known for a while now
that Twitter has a fake-users problem and is trying to deal with it,
so that shouldn’t come as a surprise to anyone.
“Higher operating expenses, on the other hand, are a bigger problem,
as I anticipate Twitter’s margins and profits to shrink considerably
in 2019.”
Currently 321 million people use Twitter, as calculated on a monthly
basis, down from 330 million a year earlier. Twitter said it would
stop disclosing monthly active users and switch to reporting active
daily users instead.
Source: BBC

Naira down to N480 to $1 as Dollars scarcity worsens

KAFTANPost - September 19, 2020
0
The Nigeria Bar Association (NBA) has written the Anthony General of the Federation (AGF), Abubakar Malami, over the recent amendment to the Rules of...