AS #EndSars protest continues in defiance of threats by security agencies, Seun Kuti has accused security agencies especially the now-defunct, special anti-robbery squad (SARS) of profiling Nigerian youths to generate the excuse to extort them.

He made this statement while responding to questions from Journalists on the occasion of the press preview of his album, titled ‘theory of goat and yam’ held on Saturday, October 10, 2020.

He said SARS had always been in the habit of profiling Nigerian youths as cybercriminals.

“Any young man they see wearing a tattoo, or dread who has a laptop or big phone, they believe is Yahoo boy or girl…” He said.

According to the Afrobeat musician, not everyone wearing a dread or tattoo, carrying a laptop or high-end phones is a cyber-criminal.

It is just a fashion trend young Nigerians have embraced.

But none of the politicians, who he claimed are the ones largely behind the looting of Nigeria’s treasury, had ever been stopped by SARS.

“I have never heard that SARS stopped any Agbada or kaftan- wearing politician or extort money from them. After all, those who steal our money are always wearing Agbada and kaftan. They carry big phones too, with laptops. Why did they (SARS) not go after them…?” He asked.

Expressing his satisfaction with the ongoing protest, Kuti said they are carrying on with a cause he brought to the fore in 2017.

Narrating his experience with security agencies, he said in most cases the security operatives always begin their intimidation and extortion with him believing a known celebrity as he, would have inhibitions resisting their bullying.

“When they see me they believe… It’s Seun the celebrity because he would not want embarrassment, he will give in to their demands.

When they shout at me and I shout back, it is then they will tell me, ‘but you are a star…’ I tell them immediately to forget that and face the issue on the ground.” Kuti said.

According to him, it is after he has resisted the aggression served him by the security personnel in equal or more dosage that they return his respect to him as a celebrity. 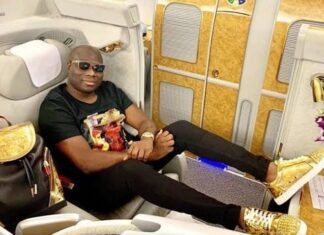 KAFTANPost - October 14, 2020
0
A Federal High Court in Lagos has fixed November 18 to give its ruling in a no-case submission filed by Instagram celebrity Ismaila Mustapha...

‘We are not seeking debt relief from IMF’ – FG