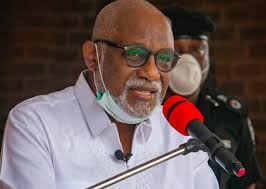 Ondo State Governor Rotimi Akeredolu has urged members of the All Progressives Congress (APC) in Oyo State to win the next governorship election in the state to honour the late former governor, Adebayo Alao-Akala.

Akeredolu gave the charge at Alao-Akala’s residence on Friday during a condolence visit to the widows, family and relatives of the late APC chieftain in Ogbomoso, Oyo State.

The Governor, who noted that Alao-Akala was committed to the unity and progress of the APC till end, said the party must be more united in respect of the late former Governor.

Akeredolu added that the APC lost the last governorship election and must put its house in order to ensure that the coming election is won.

”You have to come together to fight because of him (Alao-Akala). He stood for APC till the last. You lost the last election, you must not lose the coming one,” he said.

The Governor commiserated with the widows, children as well as the entire family of the deceased, urging them to take solace in the good work he did while on earth.

Akeredolu, who said he received the news of the late former Governor’s death with rude shock, noted that he was a man with a large heart.

“When I heard about the demise of my brother, it was shocking to me. Shocking for many reasons. Probably, we would have met a week before his death, but because I was otherwise engaged. I didn’t go for my ADC’s father’s birthday. We would have met. I was to be there,” he said.

“He was a man with a very large heart. Large heart in that, as you would know, we were at different camps. Not politics. I was only a lawyer but on the other side against him.

“Why I said he has a large heart; around the time we were in court against him, I became President of the Nigeria Bar Association. When I became President, he didn’t owe me any duty to honour me or host me a dinner. I am not from Oyo State. He hosted me to a dinner and he said I brought honor to Oyo state. Not many men can do that.”

He stressed that the late Akala lived well, adding that after the late Chief Samuel Ládòkè Akíntọ́lá, Akala was another son of Ogbomoso who brought pride to the town.