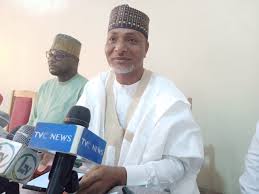 A leading aspirant for the position of National Chairman of the All Progressives Congress (APC), Saliu Mustapha, has advocated that those that will govern the party beyond 2023 should be experienced and committed.

The chairmanship aspirant, who is a former Deputy National Chairman of the Defunct Congress for Progressive Change (CPC), said this while playing host to a section of APC Social Media influencers at his private office in Abuja, on Sunday.

Mustapha said given the chance, he would make it a priority to ensure the APC remains in power beyond the next cycle of elections.

He said, “My greatest priority as National Chairman will be achieving an overwhelming win for APC in the 2023 general elections.

“And this we plan to do by building on what we have as well as bringing in new ways of doing things to continue the party’s winning streak.

“An extra advantage would be my ability to mobilize the youths within the party’s vote banks across the country. If we are able to achieve this, the sky itself will be the starting point for the party.

Mustapha further said, “I am familiar with virtually all of you. At one time or the other in the past, we have worked together. I know things can be better, that’s why our campaign mantra is about doing things differently. This is what I promise, and for those who know me, my promises are made for keeping.

“But I cannot achieve this without your support. That’s why I welcome this level of partnership. I will do all my best to sustain it.

“The new media will have a pride of place in the party secretariat with me at the helm of APC affairs so that we won’t have to be running from pillar to post at the approach of every election cycle.”