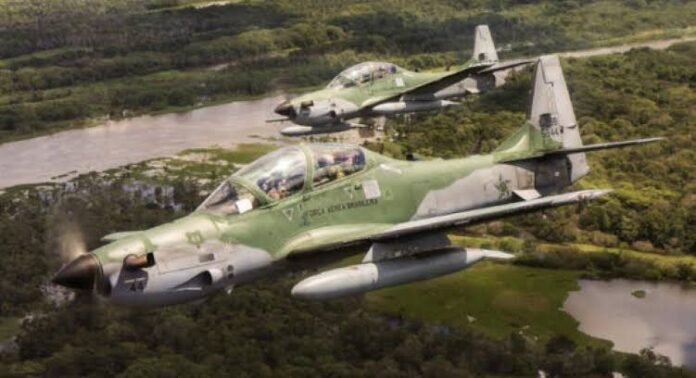 A fighter jet belonging to the Nigerian Air Force has reportedly fired a bomb on the ground troops, killing unspecified number of soldiers in Mainok, Borno State.

According to reports, the air force “accidentally” hit the wrong coordinates while targeting the strongholds of Boko Haram insurgents who had attacked the troops on Sunday.

Airforce spokesman, Edward Gabkwet, said the incident is being investigated.

“The attention of the @NigAirForce has been drawn to reports alleging ‘How NAF Killed over 20 Nigerian Army Personnel by Accident in Air Strike’ at Mainok which is about 55km to Maiduguri. The NAF wishes to state that visuals and reports been circulated are being investigated and the general public will be duly updated on the alleged incident,” the NAF said in a statement on Twitter.

“All enquiries should please be directed to the Office of the Director of Public Relations and Information, Headquarters Nigerian Air Force.”

According to military experts who spoke to KAFTANPOST in anonymity, this incident is commonly called ‘friendly fire’ and happens in almost all battlefields where airpower is called upon in close contacts between own troops and the enemy.

This is coming hours after the insurgents attacked a military base in Mainok and overpowered the troops; the development made the troops demanded reinforcement.

The truck which was sent for reinforcement was targeted and shelled by the air strike following a flawed intelligence, sources said.

“They (Boko Haram) came with heavy machines, about four MRAPS (mine-resistant ambush protected) vehicles and they overpowered the ground troops.

“Troops sent signals for air support and when they came, it missed the main coordinates; where the air force shelled their bomb was on the location of troops instead of that of Boko Haram.

“The aircraft had to turn back. They realised that they mistargeted (and) most of the soldiers started running inside the bush.” the cable quoted one of its sources to have said.

“All I can say is that the matter is being investigated. It is not a matter that we can just quickly give answers to,” the air force spokesman said during a phone interview.

In 2020, the Nigerian airforce, during a reconnaissance, “accidentally” bombed a village in Damboa LGA of Borno, killing 17 people including women and children.

A similar incident occurred in January 2017 when the air force killed more than 100 internally displaced persons (IDPs) during an accidental bombing.