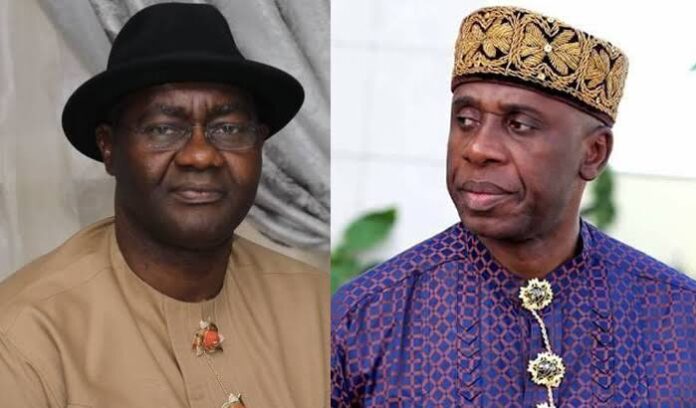 The ex-Minister of Transportation made the denial when he was interviewed by journalists in Port Harcourt, Rivers State.

Both chieftains have been at loggerheads over who controls the party in the state, leading to a sour relationship between the former allies.

Amaechi stated that there was bound to be internal wrangling anytime political transition approaches, adding that the rancour could be addressed since it was not about governorship.

He expressed willingness to meet with the aggrieved members of the party and address their grievances in order to move Rivers APC forward.

“I am not aware that there are plans by Asiwaju Ahmed Bola Tinubu to reconcile myself and Magnus Abe,” Amaechi stated.

“Any time you have a transition, you are bound to have disagreement. I am talking about internal rancour amongst us. In one, two, three weeks, we will be able to resolve what the issues are. The issues are not about the governorship candidate. I need to sit with them and say, can we move forward.”

Reacting to the decision of the Rivers State government to prosecute him over the alleged sales of the state assets, the former Rivers governor declared that neither the police nor any of the anti-graft agencies has invited him for interrogation.

“It is not about being served by the court. The Supreme Court said before you go ahead, you have to send it to the investigating authorities and it is when they finish the investigation that they will decide whether the matter will come to court or not. You have not done any of those things and you are in court. So, what will you be telling the court?

“Two, everything that was done was done transparently. There was an agency called the Public Procurement Agency and all those things passed through.

“We shouldn’t be talking about an issue that is before the court. Let the court decide. Tonye Cole did not act in his personal capacity. He represented Sahara Energy. You know this is political because they are afraid.”