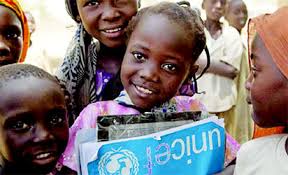 THE United Nations Children Fund, UNICEF has revealed a new trend of Female Genital Mutilation, FGM, which it said are mostly committed by grandmother who come to nurse their children’s babies.

Unicef Child protection specialist, Mrs. Nkiru Maduechesi the grandmothers use warm water to press the epiglottis of the new born babies till it becomes non sensitive.

Maduechesi made the revelation in Enugu during a sub zonal media briefing in commemoration of 2019 International Day of FGM/Cutting in South Eastern Nigeria.

She said the trend was a new form of genital mutilation which make sex undesirable for the affected ladies and led them to becoming promiscuous in search of sex pleasure.

Maduechesi also stated that the practice was dangerous as it could lead to body damage or complications during child birth. She advised nursing mothers to watch out for the trend when Grandmothers bath their female new borns.

Chief of Unicef Field Office Enugu, Dr. Ibrahim Conteh in his contribution called for increased funding and agencies to further push the fight against FGM in Nigeria.

He said that children need to be connected with, budgeted for and should be recognised in political discussions and allocation of resources.

Conteh noted that UNICEF is doing much for protection of children, particularly in FGM, but that the agencies cannot do it alone hence the need for government to recognise the children

He stated that though the practice of FGM has gone down in many countries, “we still need to do more because there are some states in Nigeria where it is still very prevalent like in Imo and Ebonyi states in the South east.

“Everybody, the leaders said it should be stopped but the will to enforce it is low. Women have been barren because of FGM practice is mostly done by quacks and they cause damages to the body.”

Conteh said the cultural practices have to stop completely at least in the next three years.