Home Security ‘We currently have about 200 personnel abroad on training’ – NAF
Facebook
Twitter
Pinterest
WhatsApp
Factual Pursuit of Truth for Progress
By Francis Ogwo
No fewer than 200 personnel of the Nigerian Air Force (NAF) are in nine different countries abroad on capacity building training onnaor combat.
This was disclosed by the Nigerian Airforce on Tuesday through the Chief of Air Staff, Air Marshal Sadique Abubakar, when he appeared at the 2021 budget defence session of the Senate Committee on Air Force.
According to Abubakar, the training of the personnel was a key strategy of the NAF towards enhancing competence in operation.
“As part of our capacity building initiatives, the Nigerian Air Force currently has about 200 personnel it is training in nine different countries of the world.
“The pilots will soon join their colleagues in the fight to secure the country.’’
Speaking further, he said that the training of NAF crew had greatly improved, adding that the measure was resulting in efficiency in air combat operations of NAF.
Abubakar also disclosed that enhancement in training of NAF aircraft engineers and technicians had also increased the visibility status of Nigerian Air Force from an average of 35 per cent to 85 per cent as at date.
He added that NAF, in a bid to ensure security, was brought closer to the people by established number of bases.
He listed the new bases to include Birini Gwari in Kaduna State, Gusah in Zamfara, Owerri in Imo and Agatu in Benue, while others are Jetu in Taraba, Jera in Plateau and Daura in Kastina State.
“We have expanded the base unit in Illesa, Osun State.We have established a base, referral hospital and helicopters’ maintenance facility in our base in Bauchi.
“These bases have actually made it easier for us to respond to security challenges that might emerge in the various geo-political zones where these bases are located.’’
He also disclosed that NAF had developed capacity of 119 Pilots, two of whom were from Liberia.
According to him, the two trained Liberian officials were released to the Liberian Air Force.
The Air Force boss said that NAF was expecting 12 combat pilots from the United Kingdom by Nov. 21, and  Nov. 22.
He also said that as part of its restructuring, NAF had also created field commands.
He said that 4,788 patients also benefited from its medical outreach programmes conducted in different parts of the country.
He commended the Senate Committee for supporting NAF on its activities while also looking forward to receiving more support from the committee.
This, he said, would enable NAF to execute its mandate further.
“We cannot win the insurgency war without a credible Air Force, and we are working toward ensuring that we bridge the gap that have existed over the years in terms of capability and capacity of the Air Force.’’
While responding, the Chairman of The Committee, Sen. Bala Ibn’Nala,  said the committee had studied the 2021 budget estimates of NAF.
In his words: “When we embarked on oversight last time, we saw the inadequacies that are associated with lack of funding.’’
He said the committee believed that timely funding was very important for the air force operation while adding that the committee was willing and ready to undertake on-the-sport assessment of the situation in the various theatres to register its appreciation of the efforts of NAF.
“We are equally willing to give in our lives in protecting the territorial integrity of the nation,’’ Ibn’Nala added. 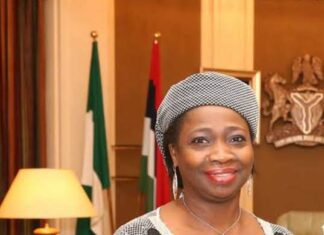 webmsater - November 11, 2020
0
The Members of the House of Representatives, have demanded an apology from the Chairprrson of the Nigerians in Diaspora Commission (NIDCOM), Abike Dabiri-Erewa, after...

Landlord threatens to eject Nigerian Embassy in Hungary over non-payment of...