As the war against narcotics continues, the nation’s anti-narcotics agency has come with an initiative to test its staff for the intoxicating drug substance. As great as the idea is, would it accelerate the agency’s movement in the direction of its vision?

The Chairman and Chief Executive of the agency, Col. Muhammad Abdallah (retd), disclosed this at the public destruction of exhibits seized by its Plateau command on Tuesday in Jos.

Concerned about the high level of dependency on hard drugs among the populace, Abdallah said the initiative was aimed at achieving a drug-free public service in the country.

He explained that the initiative would not be punitive in implementation, adding that it was introduced for the overall interest of public officers and the service of the federation.

“The proportion of the Nigeria population found to be dependent on drugs cut across both public and private sector, including arms-bearing personnel, civil servants, doctors, teachers, drivers and so on. As part of our drug demand reduction and preventive measures, we have developed a drug integrity testing initiative to be administered on all classes of people beginning with personnel of law enforcement agencies and civil servants. The aim of this initiative is to strive to achieve a drug-free public service; it is not punitive in implementation but made for the overall interest and well-being of public officers and the service,” he said.

The chairman said the agency would commence the initiative during recruitment and promotion exercises.

He called on security and other agencies, to cooperate with NDLEA in order to achieve a drug-free society.

The agency destroyed 16,697.7 kilograms of illicit drugs seized in the last four years in Plateau, which include Cannabis Sativa, Psychotropic substances and Cocaine.

This innovation can be described as one of Abdallah’s clinical approach to disrupt and destroy any negative connections, personnel across sectors, with drug abuse or its traffickers among the rank and file of his personnel.

Although, critics fault the restriction of the Staff drug-test initiative to recruitment and promotions, advising that such scrutiny should be part of the agency’s operational daily activity, for its own staff. Similarly, critics contend that all personnel in Public and Private sectors should be encouraged to conduct a similar test daily as staff reports for duty.

Appointed by President Muhammadu Buhari, to take over from Ahmadu Giade, who completed his tenure in office on November 24, 2015, the current NDLEA Chief may be using this latest directive as an illustration of his willingness to undertake major reforms aimed at repositioning the anti-narcotic Agency for optimum performance.

While talking about achievements of his agency in his message during this year’s commemoration of International Day against Drug Abuse and Illicit Drug Trafficking on June 22, 2020 in Abuja, the NDLEA Chairman/Chief Executive spoke of the need for creative ideas in the battle against drug-trafficking.

Coming from a milder concept from 2019, the agency shifted from the theme it had run within the last four years, which was “Listen First and Health for Justice, Justice for Health”, to this year’s theme: Better knowledge for Better Care.

“This underscores the thrusts of the combined efforts of nations of the world. It is people-centric, gravitating toward ameliorating the suffering of drug abuse victims.” He explained.

According to him, the theme zeroed in on one major drawback in the fight against abuse particularly, and trafficking too, adding that ignorance has been found to be a major impediment militating against the lofty goals set by the United Nations (UN).

“The absence of information, misinformation and outright disinformation has each played a part in varying degrees. Effective responses to the extant problem require many more and varied hands-on deck-policy makers, NGOs, CSOs, Corporate World, Community Leaders, Religious Leaders, Educators at all levels and increasingly service providers. All of these diverse assemblages of groups must work together to understand drug disorders are a multifactor health issue. The UN Outcome Document of 2016 puts its stamp of authority on that. Summarily, it is a health-related issue desirous of compassion and help, rather than a moral stigma to be punished.” He said.

Reiterating the urgent need for competence in the handling of drug-related mental health cases, Abdallah said that Drug use disorders are a result of a complex interplay of factors including genetics, mental health, and the environment amongst others.

“This is why caregivers must be adequately knowledgeable and have the capacity to work with vulnerable and drug dependent person. Mere slogans will not wash.

“This year’s Commemoration encourages on and all to get involved in campaign against the illicit consumption and use of drugs not administered by Clinicians. This opens the channel for dry dependent persons to access interventions, including health care, social support and education.” He said.

Coronavirus pandemic may have worsened the war against drug trafficking in the country and perhaps deepened the crisis somewhat.

“In the light of the prevailing atmosphere of COVID-19, drug-dependent persons are more acutely at risk because of their usually attendant underlying health issues, social stigmatization, and the dearth of access to health care. Making matters worse, is the fact that the front burner currently is the exclusive pressure of COVID-19, other matters less so. That is why there has never been time much worse for drug-dependent persons. The lockdown merely accentuated the dilemma. As drugs of choice became scarce, increased experimentation with newer concoctions and sell mediation would only have aggravated the problem. Chances are newer forms of addictions, hitherto unknown, may have to be contended with. Remember, also, that withdrawal Syndrome might occur having cut short the supply chain as a result of the lockdown,” said the NDLEA Chief executive.

Cannabis cultivation has continued to attract the agency’s immediate attention because, as the NDLEA boss has discovered, it is the most widely abused substance in Nigeria. In 2019, a total of 310.1 tons of Cannabis were seized and destroyed publicly, bringing the total sum, for that year, to 612,903.484 kilograms of drugs seized.

About 9,444 of drug-related offenders were arrested, while 1,195 convictions were recorded, while 795 drug-dependent persons were counselled.

I have, over the years, alerted and acquainted you with the frightening dimension of drug manufacturing in Nigeria. That was mainly in relation to Methamphetamine. We are at our wit’s end to discover more Meth Labs, not necessarily, because they do not exist. A new version of manufacturing has reared its head; the introduction of Hydrophonic outfit where Cannabis is manipulated into the production of Hashish and Canaboil, both of which are illegal since they contravene the extant NDLEA Act. Would you believe the locations? The first, in Jos, run by a Chinese and the second in Victoria Island, Lagos, run by a person of mixed nationality – Nigeria/German.

Lamenting the state of one of the major Units of the parastatal, Abdallah reported that that agency’s Treatment and Rehabilitation component of the Drug Demand Reduction Directorate is in dire need of an upgrade. He said Medical attention given to drug-dependent persons is often the last stage of the war, adding that many battles must have to be won in the course of tackling the menace.

“These are the battles of intervention, education, sensitization, counselling and psychotherapy, which the Agency is ably competent to perform, given the in-house expertise available. What is lacking is the en-tooling and capacity building required. Time has come for competent Treatment and Rehabilitation Centers to be fully built as anticipated by the NDLEA Act where psychotherapy and medical therapy should mutually reinforce each other.

“Perhaps, what we need going forward is a concept summarized as “All of Government and Whole Society” working together,” he said.

In addition to what the Federal Government brings to the table, the NDLEA boss said as a nation, there is a need to identify and aggressively mobilize public and private sectors and other strategic partners for a holistic response against the trafficking in and use of illicit substances.

“The essence would be to complement the Federal Government funding in the light of competing for national interests. This appears to be a promising, sustainable thrust that could put a damper on the real pandemic of our own nation – the drug pandemic. This consensus arrived at, would tackle the multi-dimensional problems bedevilling our nation rooted in drug abuse, which causes internal insecurity, disruption of social and family cohesion and an impinging stranglehold on the nation’s economic prosperity. Remember the concept “All of Government and the Whole Society.” Said NDLEA, DG.

According to the anti-Drug war Lord, President Buhari’s support for the Agency, which is a demonstration of his administration’s political will to confront the drug menace head-on has resulted in many presidential interventions
“The first intervention was the approval to increase the manpower holding of the NDLEA, recognizing boots on the ground are essential in lieu of technology, which the nation can ill-afford because of cost,” he said.

Additionally, he affirmed that boots on the ground permit the Agency to build from the bottom/up, to deal with the menace at local government level before it escalates to State Capitals.

Like Olive Twist, he appealed to the President to address issues of Logistics and Equipment that must concomitantly come with the upgrade of manpower approved. The two implemented together, he assured, would discernibly propel the NDLEA to greater achievements and feats.

It is hoped that Abdallah’s new anti-drug war experiment will enhance its mission to deploy all resources at its disposal for the total eradication of illicit trafficking in narcotic drugs and psychotropic substances; suppression of demand for illicit drugs and other substances of abuse; recovery of ill-gotten wealth acquired from proceeds of the illicit drug trade; protection, enhancement and maintenance of the image of Nigeria and Nigerians at home and abroad.

With over thirty years of meritorious service in strategic positions in the Nigeria Army and a security professional, the nation waits on the Adamawa-born NDLEA anti-drug Trafficking war general to move the agency faster in the direction of its vision:
To become the most proactive and leading Drug Law Enforcement Agency on the African Continent and one of the best in the world through the provision of effective and efficient services to Nigerians by cutting off the supply of illicit drugs, reducing the demand for illicit drugs and other substances of abuse, tracing and recovering drug-related proceeds and contributing to the creation and maintenance of an enviable image for the Nation throughout the world. 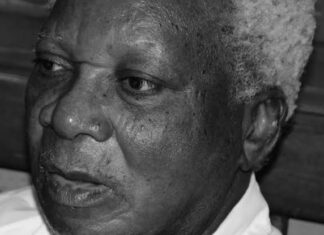 KAFTANPost - October 13, 2020
0
The Clark-Fuludu Bekederemo family of Kiagbodo Town, Delta State, on Tuesday, announced the passing of Emeritus Professor of Literature and renowned dramatist and poet,...