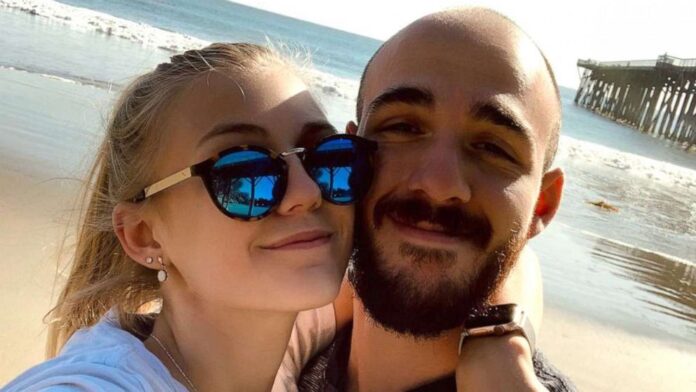 American blogger, Gabbay Petito, who was reported missing and later found dead has been confirmed to have died by strangulation.

The state coroner confirmed the news.

Recall that a 22-year-old blogger, who went on a trip with her fiance, Brian Laundrie, had been reported missing by her family.

But according to a body found on September 19 at the Spread Creek Dispersed Camping Area in Bridger-Teton National Forest, which was later confirmed to be Petito’s, she had been dead for a long time.

However, further investigation was needed to find the real cause of death.

Her fiance, Brian, has also been missing since mid-september.

In a memo dated October 5 and filed on Tuesday, Blue listed Petito’s manner of death as homicide and the cause as, “Death by manual strangulation/throttling.”

Dr Blue, while speaking with the reporters said, “Our initial determination is that the body was in the wilderness for three to four weeks,” before she was found.”

This simply means Petito has been dead since August.

“This is only one of many deaths around the country of people who are involved in domestic violence and it’s unfortunate that these other deaths do not get as much coverage as this one,” he said.

The fiance, Brian, is the person of interest in the case.

However, his family attorney has also released a statement on Tuesday, to debunk the claims.

The family’s attorney, Steven Bertolino, said, “Gabby Petito’s death at such a young age is a tragedy.

“While Brian Laundrie is currently charged with the unauthorized use of a debit card belonging to Gabby, Brian is only considered a person of interest in relation to Gabby Petito’s demise.

“At this time Brian is still missing and when he is located, we will address the pending fraud charge against him.”

According to the police, the couple, who were on a trip, were documenting their travels on social media until Brian returned home to his parents’ house in North Port, Florida, on September 1, without Petito.

Brian’s family, while narrating their son’s disappearance, told the investigators that their son had gone hiking on September 14 in the Calton Reserve in Florida but he vanished into thin air from there.

The Reserve which was later searched proved futile results.

Brian was also reported to have used the deceased’s credit card without her permission.